Aimee Barber and Ruby Watts competed at The Hip Hop Unite National Championships, and Qualifier for the annual Hip Hop Unite World Championships, held in Lower Hutt last weekend. They won the NZ Junior Duo Division (a 12 to 18 yrs age group) and have also been nominated by the judges to represent NZ at the Hip Hop Unite World Championships. Aimee and Ruby both learn dance at Taupo Academy of Dance and their duo was choreographed by Cameron Smith, who tutors and choreographs at leading studios throughout New Zealand.  This is a huge achievement, as this competition is one of New Zealand’s biggest Hip Hop Dance Championships. The girls competed against a large field of the top hip hop duos in their age division in the country, having to dance in a preliminary round to make the finals and then compete again in the finals to come away with first place and the world’s qualification. We are so incredibly proud of you both! 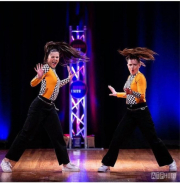