Earlier this year, our Senior Adventure Racing Squad (students from Taupo-nui-a-Tia College and Tauhara College) competed in the North Island Hillary Challenge Adventure Race, which also acts as the qualifier for The Macpac Hillary Challenge Grand Final. At this event, we are thrilled to announce that our team placed second and won a spot with 11 other schools in New Zealand to compete at the 5-day long grand final!

Over the past months, our team went about juggling Adventure Racing with their winter codes. Most weeks, students have been climbing up Mount Tauhara, doing 10km trail runs, 20-30km mountain bike rides, and getting used to tramping boots and heavy packs.

On Sunday 10th of October, we headed to Hillary Outdoors Tongariro Centre. The first two days of the event were made up of 12 different, hour-long challenges, which saw students complete a variety of problem-solving activities against the clock, in some of the coldest and wet weather the event has ever experienced. Problem-solving activities required skills in high ropes, bridge building, first aid, kayaking, cooking damper, putting a bike back together, mountain biking up steep terrain, search and rescue, transporting water in gutters, catapult building, agility course laps, while carrying equipment, and orienteering in a cave. On Wednesday our team, accompanied by an instructor (Tauhara teacher, Lucy Foote), left Whakapapa Village on a 2-day rogaine around the Northwest face of Mt Ruapehu. Teams covered anywhere between 15-40km over the two days, mainly off-trail as they navigated for controls. The weather for these two days ranged between sunshine, snow, 45 plus kilometer winds, and minus 6 degrees overnight. Students woke up to frozen boots, frozen tent flys, and frozen cooking gas. Luckily, Thursday's weather saw an increase in sunshine, less wind, and warmer weather, which our team made the most of. On the final day, there is a 50km multi-sport race, which our team completed in just over 5 hours.

Our team was the youngest team competing in the challenge with 4 y11’s, 3 y12’s, and only one y13. The college is blown away by their perseverance and positive attitude to everything they encountered. Not many people could make it through what this team did, and it is so inspiring to watch and be a part of. After everything these students experienced, one is left thinking, how could these kids fail to thrive in life after making it through such challenging conditions? In the final placings, we came in 10th. 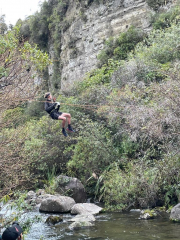