Our volleyball teams have been competing for the last three weekends in the Bay of Plenty competition. Our teams competed very well and in the main improved their placings from last year.  Girls Green maintained their placing from last year and performed really well against some hard teams.

Girls Red placed 16th with a narrow, nail-biting 19 -17 tiebreaker loss to Tauranga C, last year they were 24th. This team seemed to enjoy taking nearly every game to a tie-breaker!!

Boys A rounded off a successful weekend with a win to place them 9th up from 14th last year. They made a huge comeback on Saturday against Papamoa B when Jono Park completed 8 ace serves to save the second set.

Girls A had an amazing tournament, they entered quarterfinals 2nd in their pool having lost to Trident in a thrilling two-point loss tiebreaker. Their quarterfinal was against Otumoetai B (2 set win), then the semi-final against Tauranga A (who had not lost a game all tournament). The girls came out on fire and won 25-13, 25-10. This set them up for a final against their nemesis Trident A. The girls left it all on the court and made a second set comeback saving 5 match points before Trident got a shot into space in the backcourt. A big thank you to our three other teams who were on the sideline and in the team huddle before each set supporting the girls, it was awesome to watch.

We are super proud of all our teams and especially our silver medallists Girls Junior A, they are now placed 2nd in Division One for the North Island Junior Volleyball Champs (our highest previous ranking was around 37th ), which start on the 25th November at the Mount (currently there are 55 girls teams registered). This is a first for Taupo-nui-a-Tia College volleyball.

Thank you to all our coaches for the hours they have put in– Darren Tiplady, George Cook, Peter Cook, Emma Fraser and all our parent helpers, stand in coaches and last-minute stand-in players. Big thanks to Lisa B for the organisation in the background and the parents who cooked food for us and all those that travelled to support the teams especially on Sunday – some made the mad dash over when they heard the girls were in the final.

Congratulations to Grace Tiplady and Angelina Paenga who have been selected for the Bay of Plenty A team for the inter Provincial Championships in Napier.

Finally, we want to wish Girls A and Darren all the best for the North Island Champs!!
If you want to learn more about this exciting sport, contact Ms Birchenough. 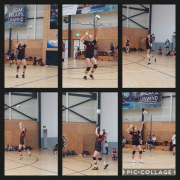