The Taupo Nui-a-Tia College Adventure Racing Team competed on Sunday at the North Island qualifier for the Hillary Outdoors Challenge.  Teams completed over 6 hours of Rogaine-style racing, which incorporated on-foot and mountain biking, along with special challenges.

The race was based in and around the Whakarewarewa forest in Rotorua, and 18 North Island schools competed for the 5 available places for October's Hillary Challenge on Tongariro.

In a close-fought event, 5 teams were all within 400 points of each other (3150 points maximum), and the young Taupo adventure racers finished in 5th place and secured their spots at the Hillary Final later in the year.

The five schools that managed to qualify for the Hillary Challenge National Final are John Paul College, Trident High, Francis Douglas/Sacred Heart, Whangarei Girls/Boys and Taupo-nui-a-Tia. These schools will be joining the seven other schools that have already qualified – New Plymouth Girls/Boys, Motueka High, Mt Aspiring College, Cashmere High, Shirley Boys/Avonside Girls, St Andrews College and Golden Bay High. The event is being held at the Tongariro Centre from 10-14 October.

Congratulations to the team, and thank you to the coaches, Janet and Nicole - we couldn't have done it without you!

The team will now be having a well-earned week off training before planning begins for the Senior Racing Team to 'muster up' some Juniors and begin training them toward future adventure racing goals. 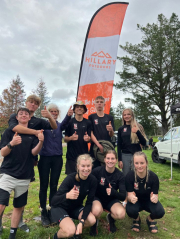 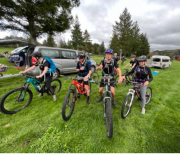