On the 19th and 20th of October, Ruby will attend PACANZ in Palmerston North with the Taupō-nui-a-Tia Year 9-10 group that was awarded a troupe nomination last year at the Dance NZ Made Nationals competition, as well as Taupō Academy of Dance Studio who also earned a troupe nomination. Ruby will then stay on for another 2-3 days and perform her solo Jazz and Contemporary routines in the Modern Solo section which is open age from 15-21 years. She also has the opportunity to attend workshops that are provided for the Solo nominees.

Many dancers try to be nominated for years after turning 15 years old. The Hamilton Competition was Ruby's first attempt at a nomination and she looks forward to learning at the workshops and the whole PACANZ experience. 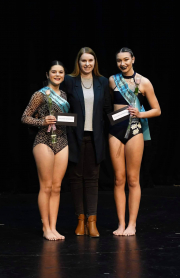